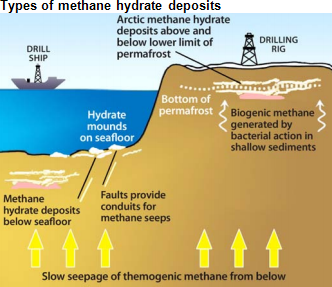 (Photo courtesy of the Office of Fossil Energy and Carbon Management.)

Juneau, Alaska (KINY) - The Alaska Division of Oil and Gas on Friday approved a drilling agreement, on behalf of an international inter-governmental research consortium, for test wells on the North Slope to confirm the long-term production prospects of methane hydrate resources.

The consortium – of the Japan Oil, Gas and Metals National Corporation, the U.S. Department of Energy, the U.S. Geological Survey, and the U.S. National Energy Technology Laboratory, is funding the effort to conduct a long-term production test through 2024.

Methane hydrates are natural gas molecules trapped in ice lattices that form under a specific set of temperature and pressure conditions.

They occur both in the subsurface and in the deep ocean.

Alaska is one of the only areas with well-characterized and abundant onshore subsurface hydrate deposits close to existing oil and gas infrastructure.

In 2018, the U.S. Geological Survey assessed the mean undiscovered conventional resource potential of methane hydrates on the North Slope to be almost 54 trillion cubic feet of gas.

This research aims to demonstrate that methane can be predictably and consistently produced from a subsurface hydrate formation.

“This is a major milestone to continue exploring what could be a significant resource and energy source in the future,” said Governor Mike Dunleavy. “I am proud that Alaska is so well positioned to host this research, and optimistic that we will be one of the premier places in the world for potential production if the test is successful. I am also encouraged to be cooperating with the Government of Japan in such a significant way; this is yet another area of strategic cooperation and energy partnership between Alaska and Japan.”

The test is currently slated to continue through 2024, and the U.S. Geological Survey and U.S. Department of Energy may release reports, studies, or data about the test based on its results going forward.