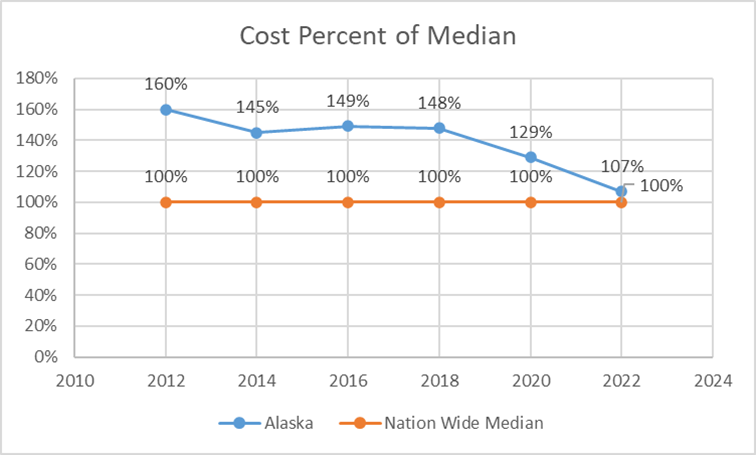 Juneau, Alaska (KINY) - A biannual study conducted in all 50 states by the Oregon Department of Consumer and Business Services shows a substantial reduction in Workers' Compensation costs in Alaska.

In 2012, Alaska had the highest Workers' Compensation system costs in the country. Now in 2022, Alaska's system costs rank in the middle of all U.S. states due to improvements in workplace safety and the publication of a predictable medical fee schedule.

"Reasonable workers' compensation costs can incentivize new startups and encourage existing businesses to expand and hire even more Alaskans. This will help Alaska move further down the road of economic recovery."

The nationally acclaimed study has tracked business data since 1986 and is the national benchmark for workers' compensation costs.

In 2012, the report rated Alaska as the most expensive jurisdiction in the nation for workers' compensation costs at 160% of the nationwide median.

"Members of the Alaska Workers' Compensation Board and the Medical Services Review Committee have worked with the multiple stakeholders to bring costs down. In addition, a culture of workplace safety has advanced leading to fewer workplace injuries over time."

The 2022 Oregon report shows Alaska ranked 21st in costs measured nationwide-a new record for the state. For the first time ever, Alaska is not ranked in the top 10 most costly places for employers in Workers' Compensation costs.