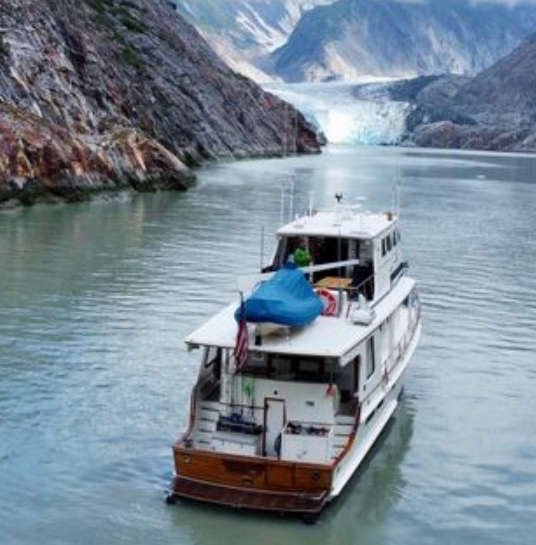 At 12:04 p.m., watchstanders at the Sector Juneau command center received a distress alert in the vicinity of Muir Inlet from a digital selective calling device registered to Cats N Dawgs, a 66-foot privately owned pleasure craft.

An MH-60 Jayhawk helicopter crew from Air Station Sitka diverted from training nearby and arrived on the scene at approximately 12:59 p.m. to find the vessel taking on water with a severe list. Good Samaritan vessel Alaskan Hunter was also on scene attempting to assist the sinking vessel.

Shortly after the Jayhawk crew arrived on the scene, the boat sank in 150 feet of water 300 feet from shore.

Alaskan Hunter recovered all four survivors, two adults, and two teenagers, from the vessel and transported them to shore where the Jayhawk crew conducted a passenger exchange. The survivors were then transferred to awaiting EMS at 2:08 p.m. in Juneau. No injuries were reported, and the survivors are reportedly in stable condition.

“Mariners all over the world, but especially in Alaska, will often drop everything to help out a fellow mariner in need. We saw this today from the Alaskan Hunter,” said Lt. Cmdr. Preston Strobel, command duty officer, Sector Juneau command center. “This could have been a devastating start to the holiday weekend.”

The cause of the incident is under investigation. The Coast Guard and National Parks Service are working with the vessel owner to establish a salvage plan.