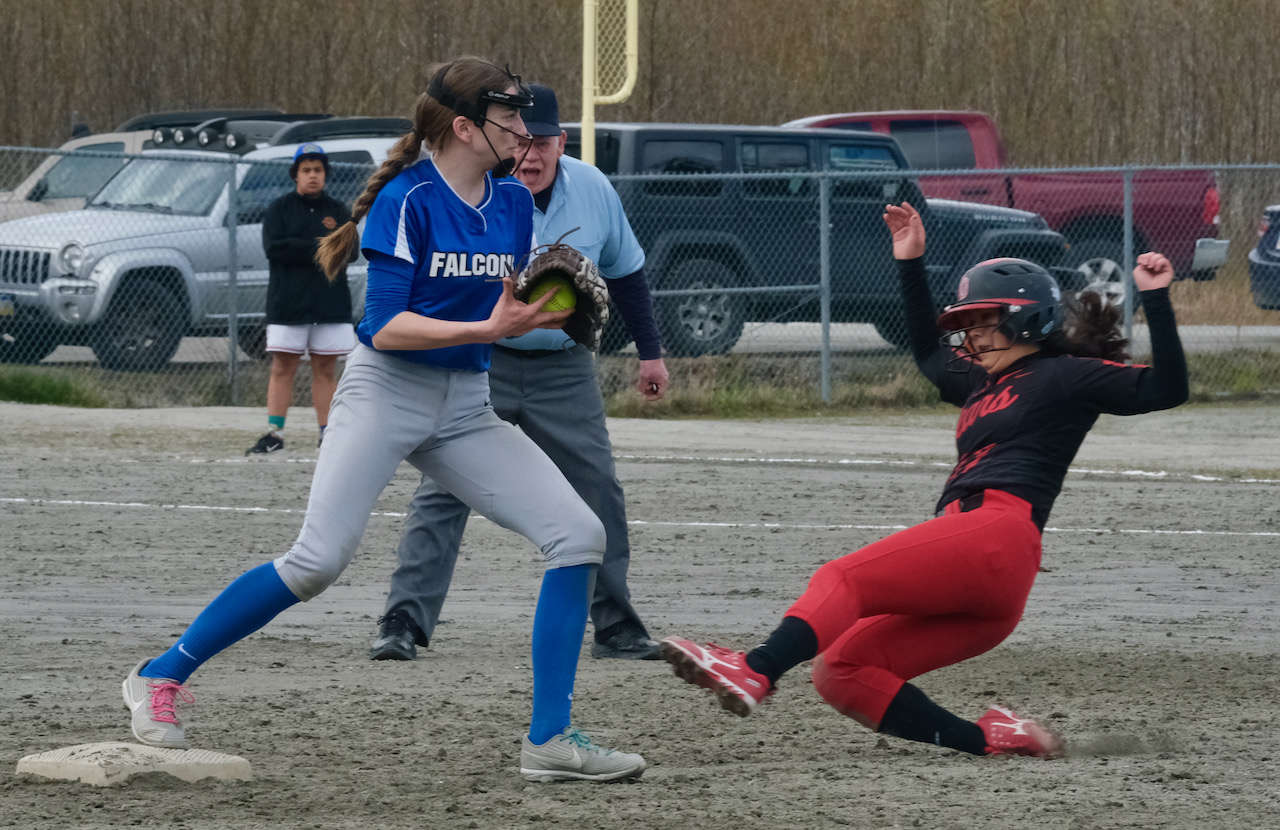 Juneau, Alaska (KINY) - The Juneau-Douglas High School: Yadaa.at Kalé Crimson Bears and Thunder Mountain High School Falcons softball teams lost their opening games at the Southeast Region V Championships in Ketchikan on Wednesday and will face each other in an elimination game today, while the Crimson Bears baseball team put the Falcons sandlot boys into an elimination game as well.

The Crimson Bears fell to the home town Lady Kings 5-4 on Wednesday.

The JDHS girls trailed Ketchikan 3-0 through four innings before getting a big rally in the bottom of the fifth.

Ketchikan tied the score in the top of the seventh inning as Paige Boehlert led off with a single, moved to second on a bunt from Rylie Welk, advanced to third on a sacrifice by Mendoza and scored on a ground ball out hit by Taylor Jackson.

In extra innings a player is placed on second to start a team’s at-bat and Mackenzie Pahang earned Kayhi’s placement. A long fly ball out to centerfield by Marley Lewis allowed Pahang to tag up and score the go-a-head run.

In the bottom half of the eighth Casperson was placed at second to start the JDHS at-bat and moved to third base on a passed ball. Casperson would be stranded at the bag as JDHS hit two infield popup outs and a third to centerfield.

The Sitka Lady Wolves put a damper on the TMHS Falcons opening game in the Region V softball championships on Wednesday, winning 10-2.

The TMHS girls’ two runs came in the bottom of the first inning as sophomore Jenna Dobson led off with a single, classmate Jack Lovejoy singled and senior Riley Harp doubled to score Dobson. Senior Sydney Strong followed with a sacrifice fly to center field scoring Lovejoy for the 2-0 lead.

Sophomore Ashlyn Gates started in the circle for TMHS, went 3.1 innings and allowed three hits and one run, struck out two and walked two. Senior Rileyanna Payne relieved for 1.1 innings, allowed four hits and four runs and struck out one batter. Harp and Lovejoy also went to the circle in the loss.

Harp and Strong led the Falcons with one RBI apiece. Dobson, Lovejoy, Harp, Gates, and seniors Tyler Johnson and Anne-Alese Rentrop had one hit each.

JDHS opened the Region V Championships with a win over crosstown rival TMHS.

The Falcons scored the first run of the game in the opening inning but the Crimson Bears took the lead in the bottom half and won in a run shortened five innings, 13-2.

For TMHS, sophomore Thomas Baxter, and seniors Preston Williams, Matthew Hartsock and Noah Chambers all had a turn on the mound.

Chambers led the Falcons bats with two RBI, scoring senior Isaiah Nelson in the first inning and Williams in the third inning. Nelson, Williams, Hartsock, Baxter and sophomore Liam Hart had one hit each.