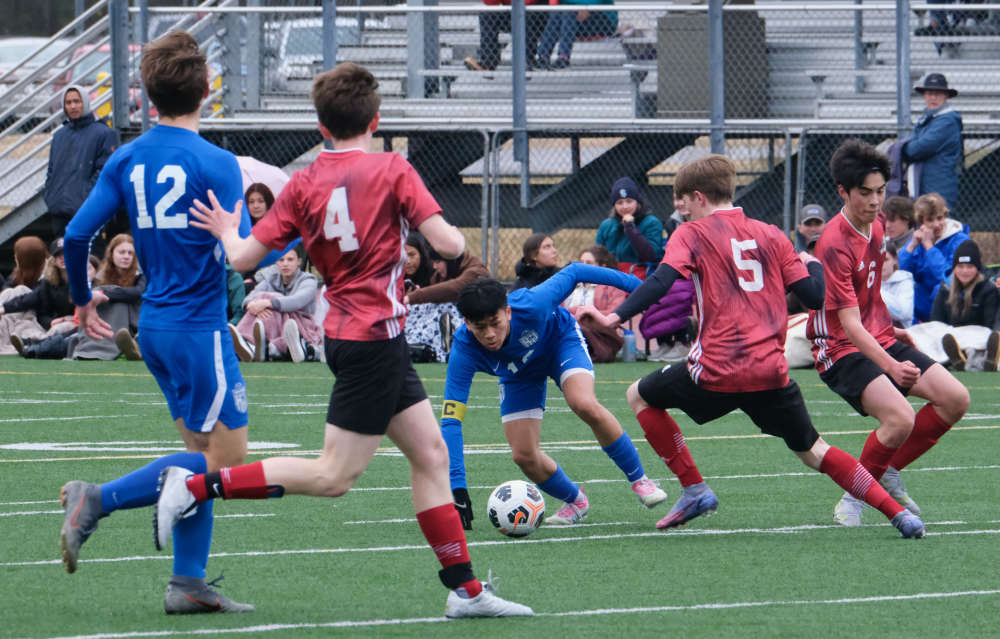 Juneau, Alaska (KINY) - The entire boys soccer Southeast Conference will play in the division two state soccer championships beginning Thursday in Anchorage and Eagle River, and a top side in the girls tournament did not make the selection.

The JDHS boys, the Southeast Conference champions with a 5-0-2 record, will open state tournament play against the team that put a cleat into their run to a state title in the semi-finals last season, the Soldotna Stars.

“Well I guess the irony is they are the ones that knocked us out last time,” JDHS coach Gary Lehnhart said. “And I had a pretty young team, only one senior. So most of the players that were in that game are still here and I think we are pleased we get another shot at them. I don’t know that it is a revenge game per se but we felt like we had a chance to get to the final last year and we didn’t so it’s a little reminder of that.”

“I think the challenge of a coach is to not change the routine too much and also to get the players to play the way they have, the way that they have been successful. But certainly you want to create a sense of urgency because at this point in the game you are essentially one and done from winning the prize. You don’t want to walk away from that game and go ‘geez, I should have maybe played a little harder or prepared a little better.’ But really you want to relax them and get them to play their game.”

Last season JDHS beat North Pole 2-0 in first round play, then lost to the Stars 3-1 in the semi-finals, and finished the tournament with a 3-0 win over Kenai in the consolation round for third place. Kenai had defeated JDHS in the 2018 and 2019 state title games. Seniors Tias Carney and Samuel Holst were state-tournament selections last season.

Lehnhart said having three teams from the SEC in the boys state tournament “speaks for itself. And all three teams went north and did well and so, when that happens, that is what really creates the seeding… there are two extra bids and for our conference to get both of them is good for the conference.”

The defending state champion Thunder Mountain boys (4-2-1 SEC) earned an at-large bid to the state tournament due to their strength of schedule against non-conference opponents. The No.3 seed Falcons open state play against No.6 Palmer. No.2 Grace Christian plays No.7 seed North Pole on this side of the bracket.

“I’m sure there is some pressure but it hasn’t really been a topic of discussion,” Falcons coach Tim Lewis said. “I’m just trying to refocus them. Just got to take it a game at a time because it is about who shows up to play each day. It doesn’t matter what’s going to happen in the future and doesn’t really matter what happened in the past. It’s just about who shows up to play that day and who wins.”

The Falcons defeated Soldotna 3-2 for the state title last season. Seniors Wallace Adams and Talon Briggs were all-tournament selections last season along with graduates Gavin Gende and Logan Miller. Classmate Phillip Lam was injured in the 9-2 opening match win against Monroe. The Falcons defeated Kenai in the semi-finals.

“We had a really good senior night and had some solid play over the last couple games,” Lewis said. “As long as they bring the same intensity and just continue to try and step up their game and play our style and our game, I think we’ll do just fine. I think we have three great teams, quality teams, and any single team can win in each game. And even though things haven’t always looked that way on paper, each game has been a fight. I expect every single team to step it up when we get to state. I think it is going to be really good for southeast overall. We’re just looking forward to having fun, playing some soccer in the sun, and send off the seniors as they move on to their next adventures.”

The Ketchikan boys (0–7-1) earned the second at-large bid to the state tournament. The No.4 seed Kings open against No.5 Kenai and are on the same side of the bracket as JDHS.

The defending state champion JDHS (8-0) girls defeated Soldotna 5-1 last season for the state title. They defeated Palmer 3-0 in the opener and Homer 3-0 in the semi-finals. Seniors Sophia Pugh and Blake Plummer were all-state tournament selections last season along with graduates Jasmin Holst and Taylor Bentley.

The Crimson Bears are the No.1 seed and open against No.8 Houston.

“That is what the season was for so hopefully we just continue to build on what we have been doing this season,” JDHS coach Matt Dusenberry said. “I think we just come in with our best foot forward and hopefully good things happen for us.”

Dusenberry felt that there was no pressure on the Crimson Bears.

“I feel like they don’t feel any pressure,” he said. “And that they just enjoy, with 10 seniors, they just enjoy being out there with their friends and playing soccer.”

Although the TMHS girls (3-5) finished second in the SEC this season, last place Ketchikan (1-6) earned an at-large bid due to a better strength of schedule record against non-conference opponents. The TMHS Falcons had placed third at last season’s state tourney and senior Kiah Dihle was all tournament last season along with graduate Elizabeth Knapp.

Ketchikan, a No.4 seed, opens state play on Thursday against No.5 seed North Pole. The Lady Kings are on the same side of the bracket as JDHS.

No.3 Homer plays No.6 Kenai, and No.2 Grace Christian plays No.7 Soldotna on the other half of the bracket.

Semi-finals and consolations are Friday, championships and 3rd/5th and 4th/6th place games are Saturday.

DI boys tournament play begins Thursday with No.1 Dimond vs. No.8 Eagle River, No.4 South Anchorage vs. No.5 Lathrop, No.3 West Valley vs. No.6 Colony, and No.2 West Anchorage vs. No.7 Service. 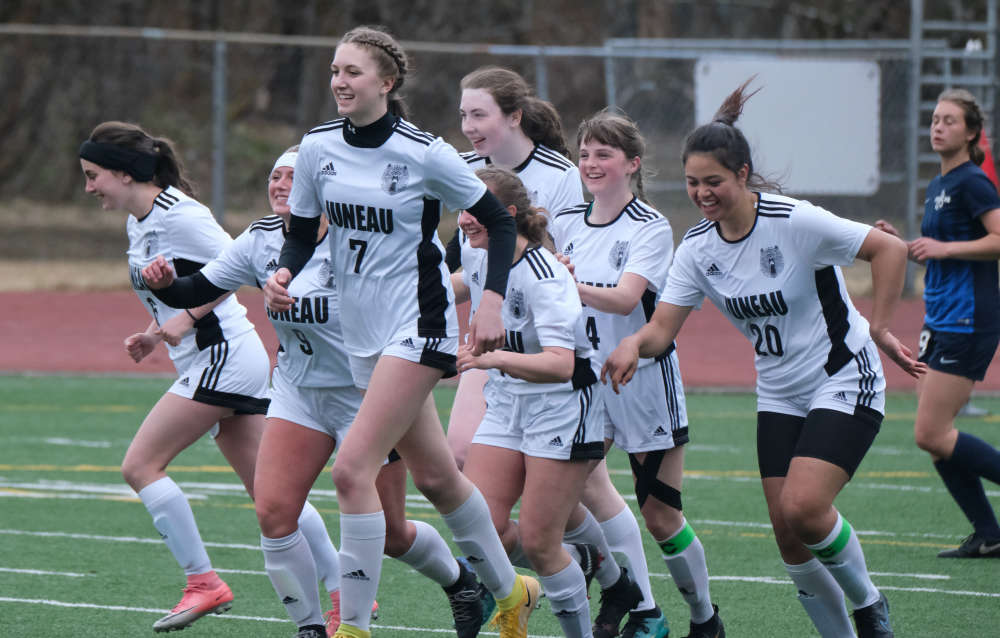 Above - The Juneau-Douglas High School: Yadaa.at Kalé Crimson Bears girls, shown against Eagle River this season, are a favorite to defend their state title this weekend in Anchorage. (Klas Stolpe/KINY)